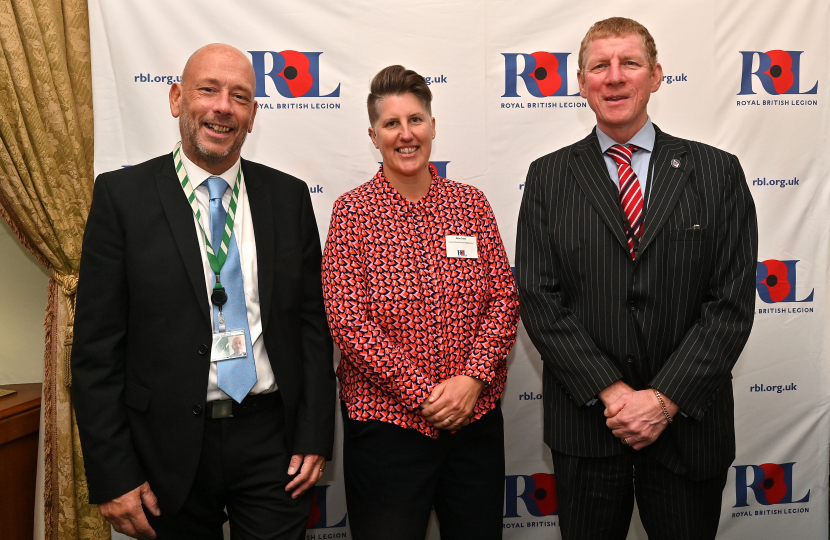 Mark Eastwood MP has met with The Royal British Legion (RBL) at Westminster to hear about welfare support for the Armed Forces community ahead of the 2022 Poppy Appeal.

The Royal British Legion is the country’s largest Armed Forces charity, with 180,000 members, 110,000 volunteers and a network of partners and charities, helping the charity to give support veterans, serving personnel and their families. Wherever and whenever needed

Mark Eastwood MP attended the RBL event in Parliament to show support for the charity’s work, and to meet with frontline welfare staff to discuss the services the charity provides.

The RBL has developed an MP Caseworker training programme, specifically designed to assist Members of Parliament and their caseworker staff to better support constituents from the Armed Forces community. The training is accompanied by a comprehensive guidance document, covering topics such as the Armed Forces Covenant, housing, schools and education, health and social care, immigration and explains the welfare support the charity can provide.

Nicola Cook, Director of Specialist Services for the RBL, said: “I was delighted to meet Mark Eastwood MP and we were grateful that he took the time to drop in.

“The RBL provides lifelong support for the Armed Forces community, from providing expert advice and guidance to recovery and rehabilitation, through to transitioning to civilian life. If a veteran, or their family, finds life difficult then we are there for them. Support and a listening ear will always be there, whatever the problem.

“We can be by their side every step of the way, supporting serving men and women, veterans and their families. We also campaign on behalf of the Armed Forces community to help improve their lives and make their voice heard.

“Our Armed Forces personnel are willing to risk everything to protect you, despite having never met you, and because of their unique contribution, the RBL will be there throughout their lives, whenever they need us.”

Mark Eastwood MP added, “I enjoyed meeting the team from The Royal British Legion and learning more about the work being done in my local area. Members of the Armed Forces community make huge sacrifices and I am proud to support the work of the RBL in honouring the memory of the fallen and building a better future for the living.

“Every year the RBL leads the nation in commemorating and honouring those who have served and sacrificed, and I would urge everyone to support this year’s Poppy Appeal if you are able to do so, because wearing your poppy shows the Armed Forces community, past and present, our admiration for their service and commitment.”