Mark Eastwood pays tribute to the people of Ukraine 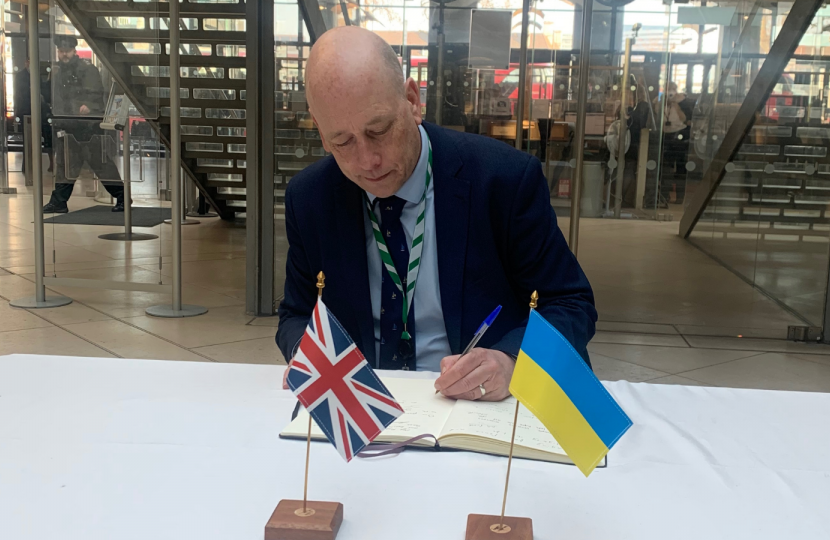 Mark Eastwood pays tribute to the people of Ukraine

Mr Eastwood was in Parliament on Tuesday (8th March) when Ukrainian President Volodymyr Zelensky delivered a historic address to the House of Commons, as he was beamed into the chamber via a live link.

Mr Eastwood also signed the book of solidarity which is to be sent to Ruslan Stefanchuk, Chairman of the Verkhovna Rada, Parliament of Ukraine.

"I would like to pay tribute to the people of Ukraine who have displayed such courage and heroism in the face of Russia's attack on their sovereignty and freedom. The Russian attack on the Ukraine is an appalling, unprovoked, anti-democratic act of aggression.

I am proud that Britain is actively seeking to assist Ukraine in every aspect of this conflict. On Monday (7th March 2022), the Prime Minister announced further support, which takes the total UK aid to Ukraine and the region for the current crisis to £395 million. I am also aware that concerns have been raised about the speed at which Visa applications are being processed. It is absolutely vital that, in line with the UK's generous offer, sanctuary is offered to those in need at pace. I am encouraged that the Home Secretary has been clear that the UK's scheme is the first in the world that's up and running in this short period of time and that the Home Office is surging capacity across every single application centre across the EU.

I will, of course, be following developments on this situation very closely."

Our Plan for Growth

Chancellor Kwasi Kwarteng on Our Plan for Growth in the economy