Budget 2015: Good News for Dewsbury and the Local Area 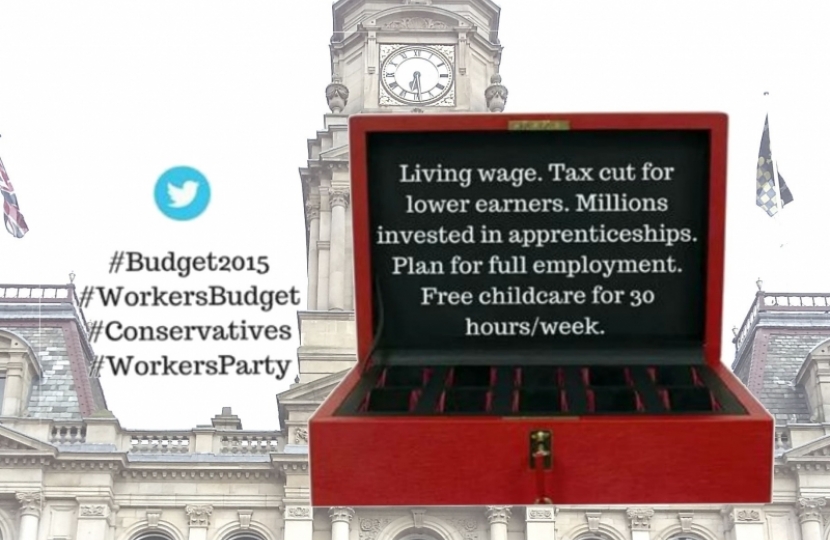 In the Summer Budget, delivered by the Chancellor George Osborne, there was plenty of good news for Dewsbury and the surrounding area.

We have had to make some tough decisions over the past few years, but thanks to staying on course with our plan for the economy, the deficit is coming down and people are starting to feel the benefit of an improving economy. Britain has turned a corner and left the age of irresponsibility behind. Without sound public finances there is no security for working people.

This was a Conservative budget that could only be delivered because the British people trusted us to finish the job. We are growing faster than any other advanced economy, business investment is up 31.9% and over two million more people now have the security of work. However, there is still more to do.

The Conservatives are giving Britain a pay-rise, which the people in Dewsbury will hugely benefit from. We are introducing a new compulsory National Living Wage which will start in April 2016 at £7.20/h and will reach £9/h by 2020. Two and a half million people across the UK will get a pay rise.

We are also increasing the Personal Allowance to £11, 000 and the 40p rate to £43, 000 so people in Dewsbury can keep more of their hard-earned money. It is right that we reward those who work hard and get on in life. With the Conservatives, the richest are paying a greater share of tax now than in 2010 - the broadest shoulders are bearing the greatest burden.

In order to support businesses in Dewsbury, we are also increasing the Employment Allowance by 50% so a firm will be able to employ four people full-time on the new National Living Wage and pay no national insurance at all. The Annual Investment Allowance for small and medium sized firms will be raised to £200,000 which will also support business to invest and create more jobs. We have already cut Corporation Tax to the lowest in the G20 and we will cut it further to 18% to send out the message that Britain is open for business.

Dewsbury Hospital is at the heart of our community. That is why I am pleased to see the Conservatives have committed to the NHS receiving an extra £8 billion of funding by 2020, this is on top of previous £2 billion commitment. Our priority is the NHS and you can only have a strong, 7-day NHS if you have a strong economy. The local hospitals we rely on, such as Dewsbury Hospital, should receive the funding they need and under this Conservative Government they will.

The Chancellor mentioned the Northern Powerhouse towards the very start of his budget, showing that it will again play a key role in the Budget and in this Government. This Government will continue to work to re-balance the economy and make this a recovery for the whole of the United Kingdom. The Government is also in talks to increase devolution to our region through directly elected Mayors.

A lot of people in Dewsbury commute to work. Therefore I was pleased to hear the Chancellor also announced £30 million of funding for "Transport for the North" to help connect Northern England and a smart-card transport scheme, similar to the Oyster Card in London, will be introduced across the North to make paying for your travel easier and quicker. In addition, Fuel Duty has been frozen again and a new Roads Fund will provide money for much needed improvements to our areas roads. We want all tax paid on people’s cars to be used to improve the roads they drive on.

We are working to provide all young people, including those in Dewsbury, with great opportunities to get on in life. With the Youth Obligation, those aged 18-21 will no longer be able to go straight on benefits. They must either earn or learn.

There are many great companies that offer apprenticeships in Dewsbury and I want to see this grow and grow. As a former apprentice myself, it great to hear the measures the Government are taking to encourage more to take on apprenticeships. There have been 2.2 million apprenticeships created since 2010, but we will not stop there. We will make that figure 3 million by 2020, each one another young person getting a brilliant opportunity.

For the people of Dewsbury that wish to go to university, to ensure university is affordable to all we will increase the student maintenance loan to £8,200 which is the highest amount ever provided.

We are keen to support working parents, therefore the amount of free childcare for working parents of 3 and 4 year olds will double to 30 hours a week. Families in Dewsbury will also benefit from our move to take the family home out of inheritance tax. If you have worked to provide for your kids you should be able to pass your house to them and not the tax man.

Britain is home to 1% of the world’s population, generates 4% of the world’s economy and yet pays out 7% of all the welfare spending. This is not sustainable so we have set out a package to save £12 billion from welfare which will enable us to better protect spending on public services. However, the most vulnerable in society will be protected. It is important to have a safety net there for those who need it, this includes increasing funding for victims of domestic abuse.

The Chancellor made it clear, we will not stand for tax avoidance. We are putting in place a package of measures to clamp down on this and find the further £5billion we promised at the election. We will also abolish the permanent non-dom tax status.

We will meet the NATO pledge to spend 2% of our national income on defence. This was a budget will deliver security to Britain. We are also supporting those who demonstrate the best in British values with more funding for ex-Service personnel.

This was the most radical budget for a generation and it has support for hard-working people at its very core. The Conservatives are the real Party for the working people of Britain. Higher employment, higher wages, lower tax -more security for working people. This was a #WorkersBudget from the real #WorkersParty.

If you want to see the full Budget in detail you can do so here.